Last night, the Digital Sisterhood Network attended the D.C. performance of Funnel Cake Flowers & the Urban Chameleons, a theatrical performance that utilizes an interactive talk-show format, a D.J., video clips, and audience participation via Twitter to discuss race and identity in America. It was held as a part of the Washington Women in Theatre’s 10th Year Anniversary Celebration at American University’s Katzen Center. 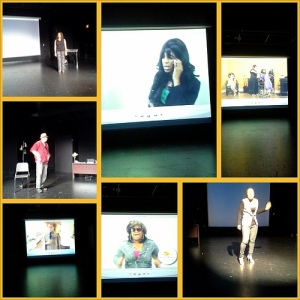 Funnel Cake Flowers, an urban chameleon reporter created by Tickles.TV founder and Emmy-nominated writer/performance artist/producer HaJ, tells the stories of “Urban Chameleons.” Urban Chameleons are people of color who seamlessly transition from the cultural extremes of white Corporate America and their ethnic communities. They represent code-switchers when they choose to reveal their accents, attitudes, and authentic selves in front of white people. 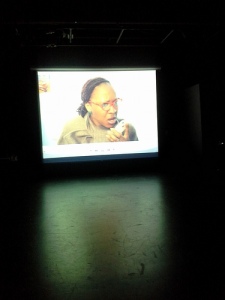 When the show opens, Funnel Cake Flower uses her bougie accent to introduce the audience to the “double-consciousness” of Dr. W.E.B. DuBois and reminds them that people of color code switch due to the dual realities they are faced to live in America. Her detailed description of ‘Urban Chameleons” includes people who watch CNN and Boondocks, listen to Jay Z and Yo Yo Ma, shop at Target and Gucci, and eat fried chicken and sushi.

HaJ does a masterful job of playing  a diverse cast of characters including a spoken word Black female bohemian poet, an upper class Black female fashionista named Sandra, and an Afro-wearing man named Leroi or Leroy who keeps it real. Through video clips, Funnel Cake Flowers shows how Black female professionals navigate the landscape of Corporate America during the week and travel into their ethnic communities to take care of their beauty needs on the weekends. She also gives insight into the challenges faced by Latina women who encounter fellow Latinos who do not speak Spanish or embrace their cultural identity. 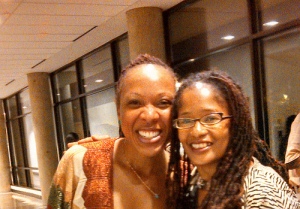 If you are in D.C., check out the final show on July 3 at 8:00 p.m. at American University’s Katzen Center. Click here for more details.